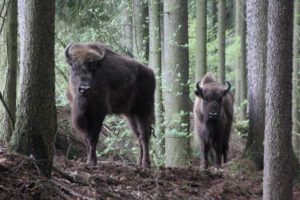 European bison was hunted to extinction in the Bohemian wild centuries ago.

ZOO Tábor is now striving to return the European bison into the Czech nature.

In May 2016, four females from so called Lowland line of the European bison, which is the most suitable one for reintroduction of bison into the wild, arrived to ZOO Tábor. A male bison from the same line from Niepolomice in Poland completed the breeding herd on November 22nd 2016. If everything goes according to plans, their offspring might roam the Czech nature very soon.“The program of reintroduction of the European bison into Czech nature is one of the key programs of ZOO Tábor, the main goal of which is protection of endangered species. We want to breed animals suitable for reintroduction into the wild. These animals would be born directly in the Czech Republic,” says the Director of ZOO Tábor Evžen Korec.

ZOO Tábor cooperates on this project with the non-profit organization Česká krajina and the Biotechnological Center of the Faculty of Agriculture of the University of South Bohemia in České Budějovice. A team of scientists lead by professor Vladislav Čurn will carry out a molecular genetic research of the breeding lines of European bison.

“ZOO Tábor and the University of South Bohemia cooperate on a project concerning the use of molecular methods (methods of DNA analysis) to identify specific molecular markers which are responsible for the differences between the European bison lines. Distinguishing of the Lowland and Lowland-Caucasian lines only on the basis of phenotypes and genealogical data is practically impossible. That is why molecular methods can be a suitable tool for the evaluation of European bison individuals and breeds. The aim of our project is to develop a simple method how to identify both individuals and breeds but also to evaluate the genetic structure of individual breeds and to set the lines parameters,” says Vladislav Čurn, Head of the Biotechnological Centre of the Faculty of Agriculture of the University of South Bohemia in České Budějovice.

Dalibor Dostál, Director of Česká krajina, representative of the international organisation European Bison Conservation Center in the Czech Republic, which also cooperates on the program, added: “ZOO Tábor has the most valuable breeding herd of European bison of all zoological gardens in the Czech Republic at the moment. Though the Lowland line originates from a smaller number of founders, from genetic and medical point of view, it is more valuable than the so called Lowland-Caucasian line, which you can find in other zoos in the Czech Republic. For the future, it would be great, if any other Czech zoological garden would follow ZOO Tábor´s example and would focus on breeding the Lowland line.”

European bison Poczekaj and his journey to ZOO Tábor